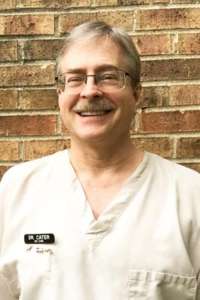 Dr. Mathew I. Cater, DMD, MBA, FAGD, is a second-generation dentist. He completed his undergraduate studies at the University of Oregon before earning his dental education at Oregon Health Sciences University. Dr. Cater prizes education and even earned his master’s degree in business administration from Keller Graduate School of Management in 1990. He also served in the US Navy Dental Corps for 6 years.

Outside of the office, he enjoys spending time with his family. He is proud to work with his son Rhett, who will become a third-generation dentist in the Cater family. Dr. Cater is an animal lover, and has rescued nine Great Danes. He also enjoys working on cars, gardening, participating in community service activities, and staying active at his church.

Meet the Great Danes that we have rescued throughout the years! 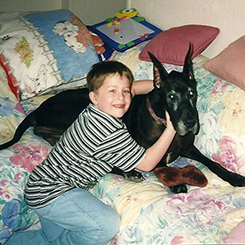 Huny Bunz was our first puppy and we picked her up when she was 8 weeks old. Her ears where just cropped and we had to change her bandages daily. She turned out to be a bit of a food thief. 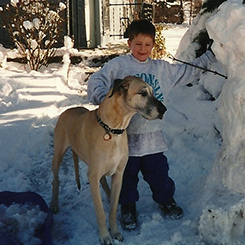 We got Ashley when she was 6 months old to keep Huny Bunz company while me and my wife were at work. They hit it off right away! Ashley loved to howl, this was her way of “talking” to us. Both Ashley and Huny Bunz where extremely gentle with our son Rhett when he was an infant. 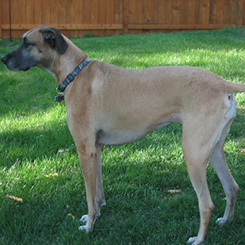 Xena came to us when she was 8 weeks old. My wife and son named her after the warrior princess. Xena was always a dog with a gentle soul, but she ruled the roost like a queen. She lived to be 14½ years old.

Kansas was 3½ when we rescued her. She had terrible skin allergies that made her seem like she was always sad. Once we had her allergies tested and had a custom serum made for her allergies she became a happy dog. 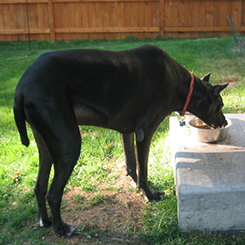 When Shady was rescued he had terrible damage to his long tail. Every time he wagged his tail it would send blood flying around the room. We finally had to have most of the tail amputated. Shady healed well but had a very “stumpy” tail for a Great Dane. 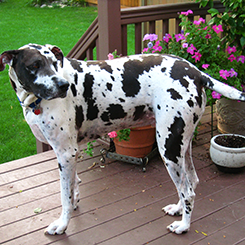 Zeus came to us at 6 months old and was a crazy boy right from the start. He was in sad shape when we rescued him. He loves to play roughly with any other dog. Zeus talks to us in his own language of whines and howls. 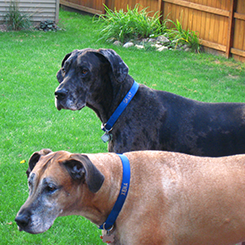 Grant was a year and a half old and came to us after Kansas passed away. Grant was abandoned when we rescued him. He and Zeus became fast friends and soul brothers. When Grant passed from cancer at 5 years old Zeus was heart broken. 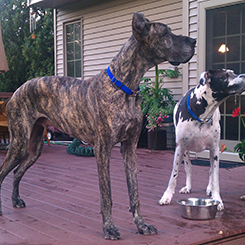 Lennon and Dreamer came to us in August 2011 after we lost Grant and Xena. They were rescued from Florida. They are brother and sister about three years apart in age. Lennon acts like a little old man, he wants love when he wants it other wise leave him alone. Lennon is currently our biggest dog and is totally freaked out by thunderstorms. 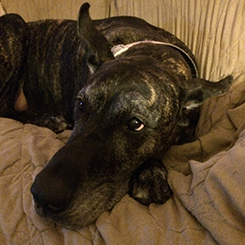 Dreamer is a sweet soul. She wants to be friends with everyone. Her favorite thing is to rest her head on your chest and gaze up into your eyes for attention. Dreamer and Lennon make adorable bookends when they sleep next to each other. 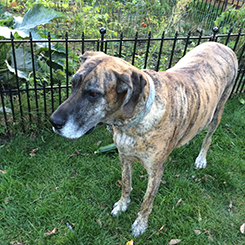 At first Gracie is a recuse who had difficulty warming up to the family but now she loving and gently putting her nose under your hand so you can pet her head.  Her new best friend is our other rescue Tequila.

When we first met Tequila at the shelter it was obvious that he was an exuberant dog. As soon as he met Gracie the fun began. He loves playing with her in the back yard rolling around in the grass.

Use the button below to make a payment online using our secure server.